Practical Post-Tornado Advice: a Roof Check is a Must! 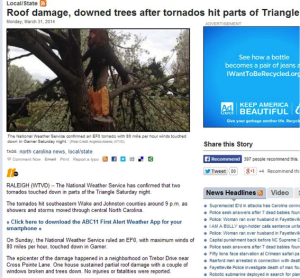 North Carolina averages close to 20 tornadoes per year, most of which turn into devastating hurricanes or tropical storms. These storms are terrible risks, especially in the eastern part of the state. You may remember that in April 2011, one of the worst storms slammed North Carolina, when 25 confirmed tornadoes touched down and left serious destruction – the capital of Raleigh alone bore damage estimated to have reached over $115 million. Recently, another severe storm occurred over the last weekend of March 2014. The local news channel ABC11 reported that:

The tornados hit southeastern Wake and Johnston counties around 9 p.m. as showers and storms moved through central North Carolina.

The epicenter of the damage happened in a neighborhood on Trebor Drive near Cross Pointe Lane. One house sustained partial roof damage with a couple of windows broken and trees down. No injuries or fatalities were reported.

Resident Scott Woolard said he was out of town when the storm hit, but came home right away when his daughter told him how the heavy wind and rain tore through their property. The twister left behind piles of wood and broken trees.

His neighbor said it sounded like a freight train as the tornado rolled through.

After a tornado, make sure to check the condition of your roof and work with your insurance company and check the list of roofing companies in Charlotte NC to fix any issues.

If a tree fell on your roof, stay out of your home until a professional can determine whether any structural damage occurred. If your home suffered serious damage, consider the services of licensed roofing contractors in Charlotte NC like Roof Roof, a full service home improvement company that will help you determine if you need more than roof repairs. In North Carolina, Roof Roof services the following locations: Charlotte, Greenville, Raleigh, Statesville, Mooresville, Concord, Kannapolis, Monroe, Hickory, Burlington, Durham, High Point, Greensboro, Chapel Hill, Cary, Wake Forest, Simpson, Grimesland and Winterville.

Getting Smart with Fire: Practical Ways to Prevent Fire at Home