Choosing The Best Shingle For Your Atlanta Roof – Part 2 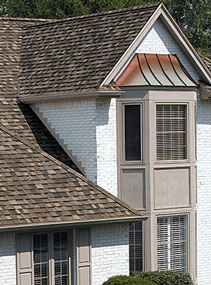 In Part 1 of this article, warranties and compliance with testing standards were identified as key items to review when choosing an asphalt shingle. Now, focus is shifted on shingle design trends, enhanced shingle features and the importance of a properly done shingle installation.

The three-tab shingle has been a mainstay in the roofing industry for decades. These shingles worked well, looked clean and neat, and offered enough color variation that homeowners and Atlanta roofing companies were satisfied.

In the last ten to fifteen years, however, architects began to ask for something more dramatic. They hoped for a product that would bring the depth and natural look of wood shakes, or the dramatic appearance of slate, yet preserve the cost and durability benefits of asphalt shingles.

A laminated shingle is made by stacking and bonding two or three shingle tabs together at various locations within a complete shingle. The thickness of the laminated shingle tabs and the shadows they create result in a stunning three- dimensional appearance when these singles are properly installed on an Atlanta roof.

In the past, all the shingle tabs in a shingle were given the same color. But now, manufacturers are mixing darker and lighter-shaded shingle tabs together, side-by-side. By properly arranging the colors during manufacturing, and by locating the shingles properly during roof installation, the varying shades of color create a convincing and pleasing illusion of depth.

For years, all you could buy was a three-tab shingle with rectangular shingle tabs. Today, you and your Atlanta Roofing Contractor have a vast selection of shingle shapes and sizes. 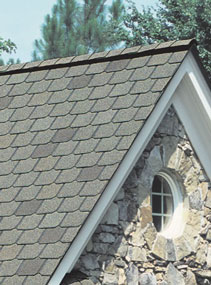 Small changes have proven to have visually large effects. For example, by simply varying the width of the rectangular tabs within a shingle, manufacturers allowed roofing companies to build more natural and random looking roofs.

This effect was taken a step farther by altering the tab edges by giving them angled lines, instead of straight lines.

The next evolution involved stealing a look from another roof covering material: slate. Shingle manufacturers realized that they could combine the concepts of laminated shingles with colorization and shape design to create an asphalt shingle that matches the appearance of flat slate roof tile.

But the story doesn’t end there. In recent years, manufacturers have begun producing even more exotic designs using shingle tabs shaped like trapezoids, hexagons and even fish scales.

Everyone knows that Atlanta can get extremely humid in the summer. This humid air creates the perfect environment for growing algae on your Atlanta roof.

Over time, that algae can appear as black streaks running down your roof, making it look years older than it actually is. To remove these stains, you must gently apply chemical compounds that can clean the shingles without removing their protective mineral granules. This is a tedious, time-consuming and hazardous job.

Luckily, in today’s shingle market, you can buy algae-resistant shingles which release tiny amounts of copper or zinc when it rains. The copper and zinc inhibit the growth of algae on your roof. Although the algae-resistant shingles won’t completely stop algae from growing, they will slow it down significantly. As a result, your roof stays cleaner, longer, and you don’t have to invest as much time and money in periodic chemical cleanings.

Protect Your Shingle Investment – Use A Licensed Atlanta Roofing Company

Most shingle warranties are not valid unless you can prove your shingles were installed in accordance with the manufacturer’s instructions.

And with today’s patterned shingles, it is more important than ever to follow the correct shingle installation method and sequence. Otherwise, your roof may end up looking like a striped circus tent rather than a warm and relaxing home.

Findlay Roofing has the training and experience to work with any shingle product that you may select. If you are looking for an Atlanta roofing contractor that can build a beautiful and dependable roof for your home, we invite you to contact us today. We are happy to provide you with a free estimate for your roof repair and roof replacement needs.

Choosing The Best Shingle For Your Atlanta Roof – Part 1