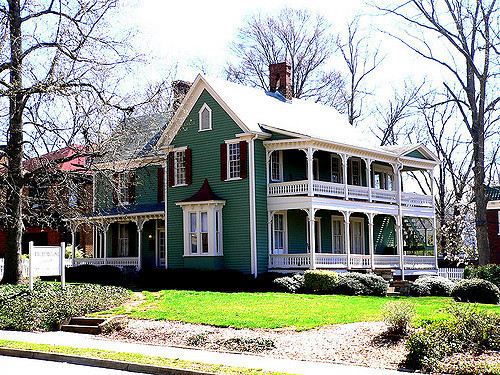 One of our goals in these posts is to educate you about historic roof styles. We want you to know just what your roof is capable of. This is why we are taking a moment to look at some of the most famous historic homes in the Atlanta region, what sort of styles they use, and how you can draw inspiration from them! We’re talking about houses like:

Garden Hills Historic District Homes: Not all homes in Garden Hills are historic, but they usually stick to historical themes and styles. Here you see a lot of Tudor and Colonial Revival houses that clearly were made with great attention paid to detail. Rooftops with shorter slopes may be more common here thanks to the aforementioned influences. Colors typically complement the frequent brickwork of these homes.

Burns Cottage: Burns Cottage provides a fun little detour when comes to home styles. It’s a replica of Robert Burns’ Scottish birthplace that was built in 1911 and has remained popular ever since. This cottage style has very shallow eaves, giving the home a more simplistic look.

Tullie Smith House: The Tullie Smith House is a popular example of an early Georgia plantation style home– but you may not realize it at first glance. The common Colonial aspects of many later plantation houses are not to be seen here. Instead, the house takes many cues from Ranch style homes as it has ultra-practical roofing. You may also want to note the secondary shed and porch rooftops, as it’s an offset from the main roof.

Joel Chandler Harris Home: Also known as the Wren’s Nest, this exotic home was originally built as a farmhouse and then transformed into one of the most unique cottage-style homes around. It mixes various elements of the Queen Anne style. Sections were added to the cottage until it became a manor. Note not only the unique roof covering the running veranda, but also the interesting shape of the gables as they rise higher and higher.

Swan House: Swan House is an experiment of the wild 1920s. It’s a Second Renaissance Revival home that adopts many palatial and Greek aspects to create a manor worthy of royalty. The style looks very overbearing today, but the ornamentation on the historic roof may still inspire ideas if you wish your own roof was a little more ornate and a little less bland.

Druid Hills Historic District: Homes in Druid Hills are large and experiment with a number of historic roof styles like Georgian, Tudor, Jacobean, and Italian Renaissance. If you want to take a drive and get dozens of different roof ideas all at once, this is the place to go. Pay special attention to the slim but elegant rooflines of the Jacobean and Georgian style homes, as well as the extravagant additions of Italian Renaissance and Tudor homes found here.

Inman Park Homes: Inman Park was one of the first planned residential areas in the city, and remains a center of unique and experimental architectures created by some of the most famous families. Look for striking gables, cupolas, and roof additions for renovation ideas!

How to Tell if a Roof Stain Is Old or New

Sealant: What Is It & What Does It Mean To Your Roof