Roofing Through the Ages 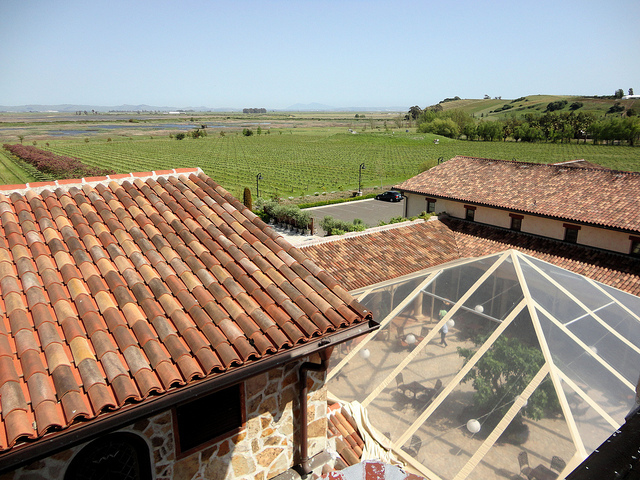 Did you know that Georgia is an amazing time capsule when it comes to the history of roofing in the United States? Here’s a quick guide on the timeline of home styles found in Georgia and what this means for rooftop choices. See how many you can spot in and around Atlanta!

Colonial homes were some of the first to appear in the United States in the 1600s as the colonies were formed and more expensive homes began to be built. Colonial styles include Cape Cod, Georgian, and Dutch Colonial. These are all easily recognized because of their symmetry and large roof windows with prominent gables. They also feature a sharply hipped, primary roof. At least a couple columns are typically present on the porch.

You find country homes (i.e. cottage and farmhouse styles) in places where there wasn’t enough room or money to build a Colonial house. These feature very simple gable roofs tops (you see this in cottages) but more complex bonnet and Mansard styles (you see this in large family farmhouses).

At the end of the 1700s, new affluence gave rise to a brief Neoclassical and Greek Revival trend. These types of homes tend stand out because of their massive pillars and blocky construction. Rooftops tends to stay slim, with basic side gables or short hip rooftops.

European styles were essentially more complex versions of Colonial homes with many different cycles of popularity for larger, manor-like homes. Styles included French Country, Tudor, and Norman. While the hip roof and side gable roof remain popular here, they became far more complex, with many layers and angles – as well as the occasional tower. Gable windows, however, are much rarer on these homes.

From the early 1800s and into the early 1900s, Victorian styles became popular for newer, larger homes. These were more advanced versions of the European styles, but tended to use steeper, simpler side gable rooftops (towers and turrets, however, still showed up). This style includes most Gothic and Queen Anne homes in the United States.

Mission, Spanish, and Italian Renaissance all fall under this category, which sprang up in the more arid U.S. climates. Here, hip rooftops reigned supreme. Unsurprisingly, they were typically covered in tile instead of shingles.

Modern homes include Ranch, New American, American Bungalow, and Traditional styles. All of these styles are examples of how the elaborate designs of European and Victorian homes can be condensed into smaller, cheaper settings once reserved for cottages and farmhouses. This modern phase spanned most of the 1900s and led to the styles we see today. The average home is a Ranch or Traditional-styled home. Low pitch gable rooftops are common here.

Contemporary is a tricky category. This category typically includes modern homes with extra flourishes (including large windows, unique roof construction, green or eco-friendly features) and a greater attempt to blend in with the landscape. Flat rooftops commonly found in contemporary homes.

Shoots & Ladders: Roof Repair Is Not a Game