What Should My Atlanta Roofing Contractor Use, OSB or Plywood? 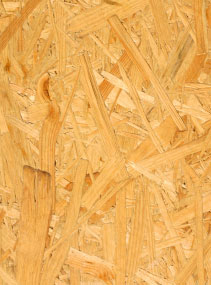 Plywood has been a staple of the construction industry for generations. For many, plywood is synonymous with wood. But not everyone is familiar with oriented strand board, or OSB, a popular plywood alternative among home builders and many Atlanta roofing contractors. Is OSB a good choice for building your new roof?

OSB May Look Like Scrap Wood, But It’s Not

On more than one occasion an Atlanta roofing contractor has pulled an OSB panel off the truck only to hear his customer ask, “You’re not planning on using that scrap wood for my roof, are you?”

OSB may look like scrap wood to the uneducated eye, but it is actually a composite material that has been engineered for strength and durability, just like plywood.

Each OSB panel is made from oriented wood strands cut from healthy trees. Each strand has been machine cut to a length of 3-4 inches, and then is coated with wax and adhesive. The strands are then grouped in layers. The strands in each layer are aligned lengthwise in the same direction.

An OSB panel is made by stacking the oriented strand layers such that each layer is rotated 90å¼ from the one below it. This results in alternating strand alignment from layer to layer, and provides equivalent strength in both directions of the panel.

To complete the manufacturing process, the layers of wood strands are squeezed by a heated press which removes all air gaps and heated to activate and solidify the embedded structural adhesives.

Why Atlanta Roofing Contractors And Builders Use OSB Vs Plywood

OSB has been constantly improved since its introduction in the 1980’s. Today, its performance is equivalent to or better than plywood in terms of strength and the ability to grip nails.

For example, in 2003, the National Roofing Contractors Association (NRCA) performed comparative testing and determined that smooth-shank nail pull-out values are “nearly identical for similar thicknesses of plywood and OSB.” The same testing also demonstrated that ring-shank nails (which are recommended by the NRCA for nailing asphalt shingles) provided “substantially higher pull-out values in OSB.”

Price is another reason why some Atlanta roofing contractors and home builders choose OSB over plywood. Panel costs for OSB are a few dollars lower than for plywood, which results in noteworthy savings over the course of a roof replacement project.

With an economic advantage and high strength capabilities, it is no surprise that OSB production continues to exceed plywood output in the United States and Canada. In fact, most construction professionals agree that OSB will continue to displace plywood as the years roll by.

Why Some Atlanta Roofing Contractors Don’t Use OSB

Once an Atlanta roofing contractor decides to use OSB, he usually doesn’t return to plywood for building roof decks. But there are other roofers who refuse to make the leap.

The source of contention for most OSB opponents is moisture. Although OSB is available in moisture resistant grades, identical to those for plywood, some roofers are concerned by the fact that OSB is more sensitive to moisture.

For example, although OSB absorbs moisture more slowly than plywood, it also retains moisture longer than plywood. This increases the risk of wood rot for OSB, if it is improperly installed and exposed to excessive moisture.

OSB is also known to expand, or swell, if it absorbs moisture. Often, the swelling is greater along panel edges than in the center. In severe cases, this uneven thickness could telegraph through and appear as visible ridges or lines on an asphalt shingled roof.

On the other had, roofers who prefer OSB argue that a well-built roof easily protects a roof deck from excessive exposure to moisture. They contend that installing proper roof ventilation and applying sealants to trimmed panel edges will prevent moisture from damaging or altering OSB panels.

If you would like to learn more about using OSB and Plywood to build roof decks, the Findlay Roofing team invites you to contact us today.

We’re also happy to provide all of our neighbors in Atlanta, Marietta and throughout North Geogia with a free estimate for any roofing project, from minor roof repairs to complete roof replacements.

Why Does Your Atlanta Roof Need Underlayment?